LCDs must switch between positive and negative pixel voltages in order to prevent picture burn-in or the accumulation of static electricity (polarity inversion).

As a result, you might be able to see some interlacing patterns as visual artefacts, such as vertical lines, scan lines, checkerboard, mesh, or grid effects, occasionally with colour distortion.

The monitor’s panel and the material you’re viewing will determine how obvious these artefacts are.

Pixel walk, for example, can be seen on one monitor unit but not on another of the same type since each individual panel varies by at least a small amount.

As a result, one monitor unit may display vertical interlacing lines on static content, while another monitor unit of the same type may display what appears to be a checkerboard pattern on moving or dynamic content.

With the exception of rare instances, this problem is not apparent until you are examining numerous test photographs that are meant to highlight these artefacts.

What Is Pixel Walk Or Pixel Inversion? 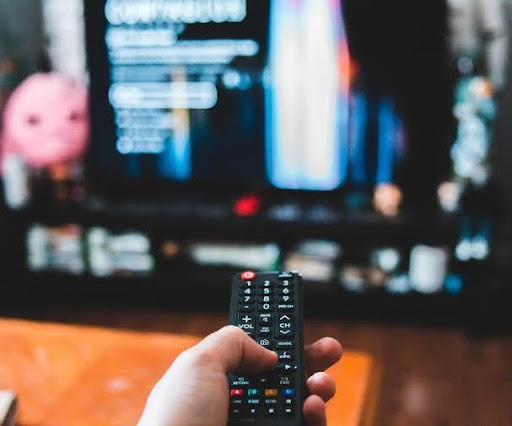 The term “pixel walk/inversion” is defined as follows:

In simple words, LCDs use polarity inversion to prevent the picture from being burned in by static voltage (alternating between negative and positive pixel voltages). This may cause specific sights like scan lines, grid/mesh effects, vertical lines, and checkerboard patterns (often accompanied by colour distortion) to stand out.

Except under the most extreme circumstances or when viewing images or movies that are meant to draw attention to such problems, pixel walk is not evident. Additionally, TN panel monitors with high refresh rates tend to have it more frequently (but not always). 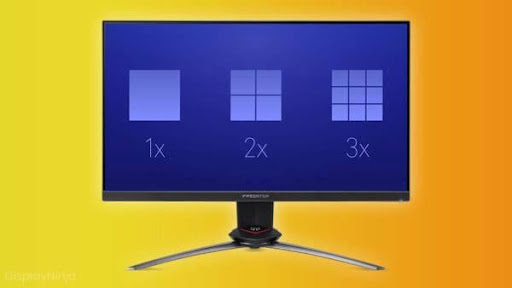 WARNING: If you are sensitive to flicker, stay away from all tests.

Visit lagom.nl, which also provides a wealth of information on pixel walk/inversion, to determine whether your display exhibits pixel walk or inversion.

As was already mentioned, pixel walk/inversion isn’t typically noticeable, so it is strongly advised against testing your screen if you haven’t already noticed any. If you do, you’ll soon start to notice it in regular use, which will annoy you more than anything else. Therefore, performing these tests shouldn’t be a top priority, aside than evaluating a monitor before purchase or if you suspect your monitor has strong pixel walk.

According on the type of visuals you are having, doing the following activities might help you get rid of them:

Disable all adaptive sync. If you have overclocked your monitor, reset the refresh rate to its default value. Adjust the display’s brightness or sharpness Change the settings for the reaction time overdrive of the display as these sites are more obvious on a cold monitor, let your device warm up. Reduce the resolution of your screen and set it back to native. You may restart the graphics drivers by simultaneously hitting Win, Ctrl, Shift, and B. (This will produce a beep sound and turn the screen black, during which it will reset the drivers and your screen will start to operate normally)

Turn any motion-blur reduction features off. Another option is to move away from your monitor, which won’t actually solve the issue but will lessen how distracting and obvious the images are.

Check for FRC or overdrive, which may be the cause of the visual distortions you experience, or change your monitor if these things don’t stop the pixel walk or inversion.

There may be a tiny flicker in one of the eleven boxes below. The only difference between the a/b variations and the original is how your browser window is positioned. Strong flicker is a sign that the monitor’s voltages need to be adjusted. Unfortunately, you probably can’t make any changes to this on your own. In real-world scenarios, a noticeable flicker indicates that when viewed up close, simple colours exhibit “pixel wander.”

The monitor must be in its native resolution for both of the inversion tests below. The clock and phase settings (test page) should be set to the proper values if the display is connected via a VGA (not DVI) cable.

The full-screen inversion is also available, but be aware that the flickering may be upsetting. Next, press “next,” and keep an eye on the display. Patterns 4a or 4b appear to be responsive to the majority of LCD monitors. The sequence 7a/b triggers the Asus Eee. Other patterns may, as a side effect, show a ghost shadow to the right of the black navigation rectangle. Flickering and thus ghosting are not present on a perfect monitor. In the full-screen test, the flickering can be more pronounced near the corners of your monitor than in the middle. 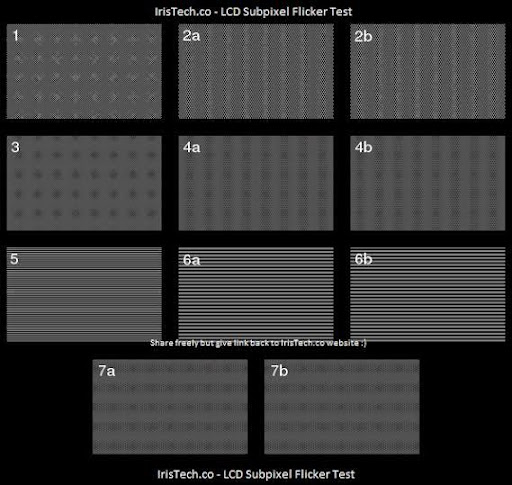 Pixel walk/inversion abnormalities are sometimes mistaken for other visual anomalies brought on by FRC or overdrive.

Temporal dithering is a technique used by monitors with FRC (Frame Rate Control) to “fill-in” the colours that the display is unable to support. There are times when this transitional hue results in a 30Hz flicker.

The majority of individuals never see this flicker, however occasionally moving patterns can be seen in darker tones. Sensitive individuals may have eye strain, but this is quite uncommon. The patterns on defective panels are much more pronounced.

You may also check out the “Black level” test at lagom.nl to see how this works.

Monitors employ overdrive to increase reaction time (the speed at which pixels transition from one colour to another). Overdrive that is applied too forcefully causes pixel overshoot, while weak overdrive causes noticeable trailing or ghosting behind moving objects (also known as inverse ghosting).

The perfect overdrive mode will operate flawlessly at all refresh rates on some displays if it is left in its default setting.

The ideal overdrive setting for most displays must be manually determined, and depending on the refresh rate, it may be a different level.

Once more, you may use Blur Busters’ motion tests to determine which overdrive mode is best for your display.

The display’s alternating positive and negative voltages cause pixel walk or pixel inversion, which might occasionally appear as different visual abnormalities when used regularly for activities like gaming, viewing videos, etc.I hope this article was helpful for you and was informative. 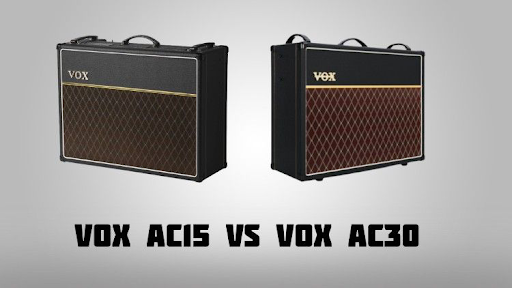 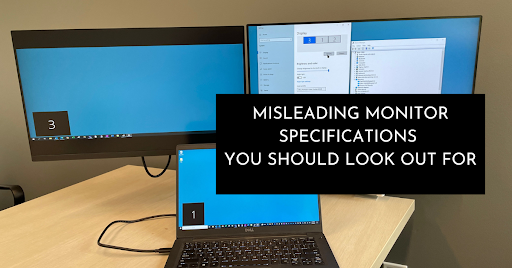 Misleading Monitor Specifications You Should Look Out For